Immediately the roof needs to be addressed.

Due to the significant level of decay to the attic ceiling joists caused by the gap in the roof along the ridgeline we were not able to fully survey the damage. The following is based on the 2000 HSR recommendations and updated recommendations based on the damage we were able to see We first recommend a specialists make a more thorough investigation into the roof structure to gather a better idea of the damage caused by the gap in the roof.

First and foremost, at the very least a tarp or some sort of covering material should be attached to the roof to prevent further water leakage into the structure. The best option would be total replacement of the roofing material but a cheaper alternatives would be tarp to stop the water damage from continuing.

The ridgepole should be replaced and rotted rafters should be sistered, replaced in part, or completely, as necessary. Also it is recommended that the metal roof be replaced. The metal roof is said to be the original tin roof, making it around 80 years old, but from the attic space the metal is clearly galvanized steel or terne metal. Replacing the roof is necessary so that the building can last another 80 years and beyond.. A five "V" groove continuous roll metal would be appropriate. The roof should be pained red to represent the historic color, and to prolong the life of the metal roof. Until the roof is replaced both the ridgelines of the roof and the valleys should be inspected closely and sealed properly to stop any further leakage.

The bending built-up 2x4 beam below the transition truss must be replaced. The best fix would be replace the entire beam with one that is proper size. Modern wood technologies may allow for an engineered wood I-beam that is not necessarily much larger than the existing built-up beam. Because the beam is currently "boxed-in: with ceiling boards, a new larger beam can be installed and concealed in the same manner.

The lowered attic vents on both the north and south ends of the building need to reconstructed or replaced in order to keep moisture and dirt/leaf litter out of the attic.

All rooten ceiling boards should be replaced with similar boards. Also, flashing should be installed or reinstalled around the chimneys in order to stop leakage. 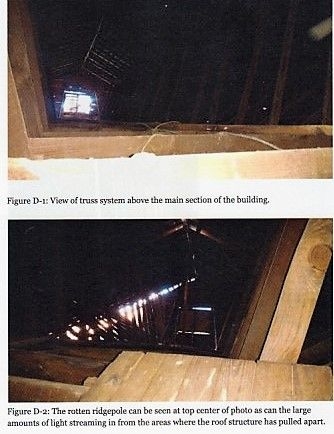 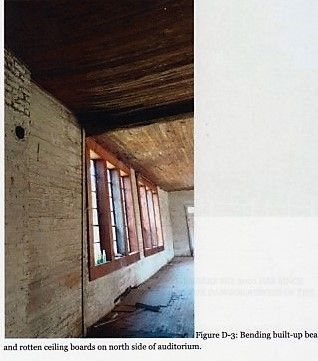 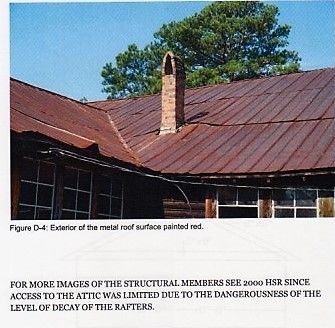 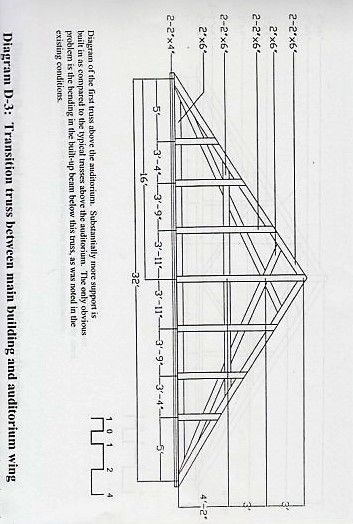